Are plant-based alternatives healthier than meat?

Diets high in red and processed meat have been linked to a range of health problems, leading many consumers to choose more plant-based alternatives. But are vegetarian burgers, sausages and nuggets really a healthier option?

Diets high in red and processed meat have been linked to a range of health problems, leading many consumers to choose more plant-based alternatives. But are vegetarian burgers, sausages and nuggets really a healthier option?

A new generation of plant-based meat alternatives have entered the market with the aim of mimicking meat as closely as possible. Their manufacturers often promote them as a simple way of avoiding high levels of meat consumption for the sake of the environment and for human health. However, a recent study in the Journal of the American Medical Association (JAMA) warns against promoting the well-documented positive health effects of a vegetarian diet in relation to alternative meat products.

As the authors of the JAMA article suggest, it is important to consider dietary context when eating a well-balanced diet, which doesn’t mean you need to completely replace meat with plant-based alternatives and vice versa. Foods such as meat alternatives can sometimes lack nutrients leading to a lower overall diet quality and nutritious protein sources such as nuts, seeds, legumes and pulses, don’t have to be just for plant-based eaters as they provide excellent nutrients for meat eaters.

Recently, plant-based meat alternatives have also come under fire for their long ingredients lists. Some had assumed that meat alternatives were exempt from the clean label trend, as they tended to contain a lot of ingredients, including thickeners, preservatives, flavourings, oils or hydrocolloids that most consumers would not recognise. The theory was that consumers of such products tended to place more importance on animal welfare than on natural ingredients. However, according to Mintel, pulses and recognisable vegetable ingredients like pea protein, kale, spinach and beans are gaining in popularity.

Market research has shown that taste is still top priority for consumers of meat alternatives, but health is also an important factor, particularly among younger consumers of plant-based proteins.

Responding to the growing demand, suppliers of alternative proteins, including Roquette, Cargill and Valio, have been investing in new production lines and facilities. According to Eurostat figures, the land area used to grow pulses in the European Union has increased by 65% from 2013 to 2015.

There is no question that the move toward meat alternatives has become a major food trend. But whatever reasons consumers give for their choices, manufacturers must bear in mind other trends in the industry if they aim to stay relevant, including those for clean label ingredients, reduced salt and saturated fat.

At Kells, we have developed two high protein bread blends where all the protein comes from cereal/pulse sources. This allows consumers to boost their protein intake without having to rely on traditional but less environmentally sustainable meat and dairy sources. These establishedblends allow our customers to make great tasting bread for consumers, that has the added advantage of an increased protein content and no additional additives or saturated fat compared to regular bread. By choosing this bread for everyday use for sandwiches and toast for example, consumers can reduce their consumption of other types of protein.

The protein which gives both blends their high protein status comes from a sprouted milled seed blend made from sprouted soya, sprouted flaxseed, apple fibre, sprouted pea, sprouted lentil, wheat and also, in the case of the white blend, rice protein.

A two slice (80g) serving of our protein bread provides over one fifth of the daily protein requirement for a normal adult on 2,000 calories*.

As well as boosting protein intake, both these breads can also help in the growth and maintenance of muscle and bone health. 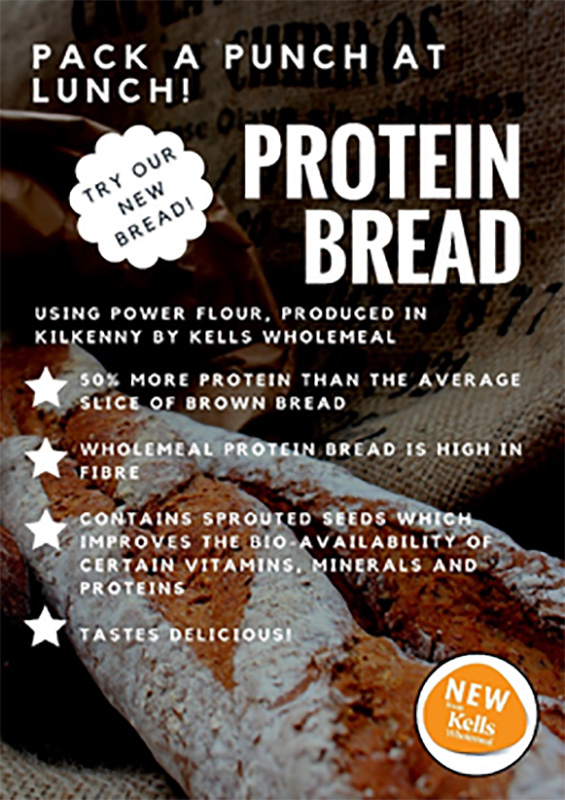