Looking for inspiration to offer something new to your customers? Why not try these new sweet bites, which are made from an existing Kells bakery blend? Red velvet thins are easy to make using 3334 Kells Red Velvet Blend and are an ideal accompaniment to morning coffee or as an afternoon treat with a cup of tea.

To make the biscuits just add egg, butter and chocolate chunks, divide into 20g balls, then bake for approximately 10 minutes. They are delightfully distinctive and have the classic flavour of red velvet plus an intense burst of chocolate flavour from the chunks.

Just ask Kells for more details. You can also follow us on LinkedIn. 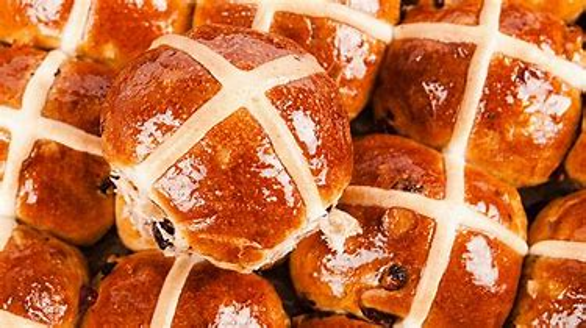 Thinking ahead to Easter

Thinking ahead to Easter

In the lead up to Easter, one of the most popular seasonal foods is the deliciously sticky hot cross bun. The lightly fruited and spiced, sweet bakery treat is usually associated with Christian traditions and in particular Good Friday. The traditional paste or shortcrust pastry cross is reputed to symbolise the crucifixion.

Some sources say that versions of the confection pre-dates Christianity and the cross shape indicates the four seasons celebrating the arrival of spring and that the idea was adopted by Christian culture. Whatever the origin, there is no doubt that this classic bun is in high demand at Easter.

Traditional hot cross buns will always be popular, but over recent years there has been an increase in the market for new types of buns such as salted caramel, blueberry or chocolate chip. So, why not tap into this large market and take the opportunity to expand your range this year?

Whatever type of buns you are baking, there’s no need to buy a specific blend. Our versatile 3901 Kells Bap Mix can be used as a base to make the very best hot cross buns – choose from classic buns or get creative and add extra ingredients such as toffee, chocolate or caramel. Plus, this versatile bap mix can be used to make a range of other bakes, all year round.

Just ask Kells for more details. You can also follow us on LinkedIn. 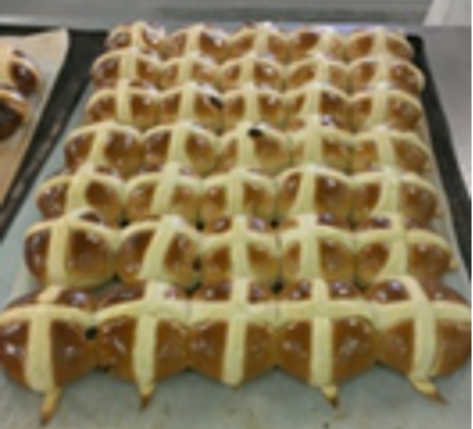 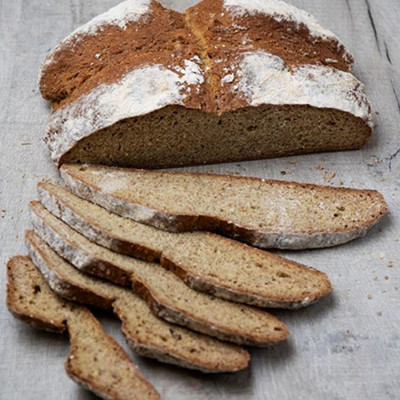 Soda bread is an iconic Irish bread and we are proud to champion it! We offer a range of Irish flours to make soda bread from scratch plus eight soda bread blends for even easier baking. Soda bread along with Irish stew, Barmbrack, Irish whiskey and dark porter stout has become one of the traditional foods associated with Ireland. In Ireland the term ‘brown bread’ is commonly used to refer to soda bread and export bakers will tell you that in the lead up to St. Patrick’s Day, international demand for Irish soda bread grows dramatically.

So, how did it all begin? Soda bread was first made in Ireland in the Victorian era – after sodium carbonate (a precursor to today’s sodium bicarbonate or baking soda) was first produced in 1791 by Frenchman Nicolas Leblanc.

Following the arrival of baking soda, soda bread began to grow in popularity. Irish-grown wheat that was, at best, marginally suitable for making yeasted bread was perfectly suited to the new soda-raised bread. With this new ingredient, bread could be made with locally grown and milled wheat and buttermilk (at the time a byproduct of butter or cheesemaking). This breadmaking process was quick and simple and the ingredients were cheap, so it was a popular choice. During the Irish famine, in 1845, soda bread became a staple food. Everyone could make soda bread at home, as it could be cooked in a pot, over the fire and there was no need to have an oven. This traditional cooking method resulted in the distinctive rounded loaf shape that is often associated with classic soda bread today.

Until around the second world war, most soda bread was made at home, in hotels or restaurants. As a bakery product, soda bread was looked down upon by many professional bakery businesses in Ireland. It was almost impossible to get a bakery-made soda bread in the 19th and early 20th century in Ireland as they only made yeasted breads. Today, soda bread is popular with home bakers and commercial bakers alike.

Kells is proud to be part of the Irish soda bread story. We started milling wheat from Irish farms, that work especially well in soda bread, seven generations ago and continue that tradition today. Whether you choose one of our flours or soda bread blends you will get a great product with fantastic provenance and a superior taste.

For more information on the different Kells flours and blends, suitable for making soda bread, see our feature A choice of classic Irish soda breads or ask Kells for further details. You can also follow us on LinkedIn. 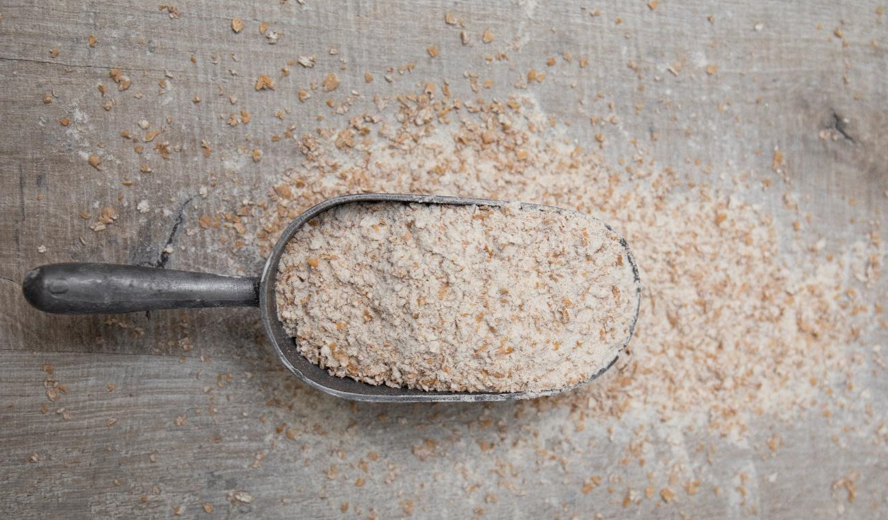 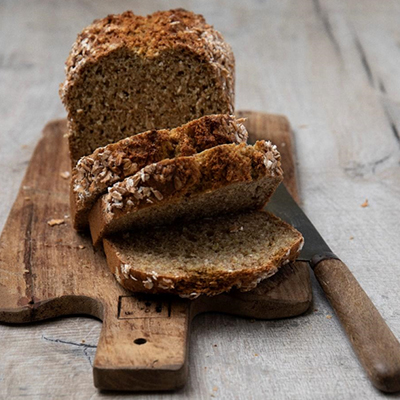 A choice of classic Irish soda breads from Kells

A choice of classic Irish soda breads from Kells

Ireland is famous for soda bread and Kells offer a choice of eight different soda bread blends. We have seven generations of milling and bakery knowledge and expertise, so you can be confident that all our flours and blends really deliver. The whole range is preservative and yeast free and includes the following blends:

3004 Hi Fibre Oatie Soda
This versatile blend can be made into brown soda bread or fruited soda bread. It contains oat flour, oat flakes and oat bran to give it a distinctive flavour and a slightly denser texture than wheat soda bread.

3003 Hi Fibre Brown Soda
Choose this popular blend for a delicious, traditional brown soda bread. Coarse bran pieces add extra texture and as well as being high in fibre has no added sugar.

3008 Millers Munch Soda Bread
Made with flours milled in Kells’ traditional stone grinding mill, this high fibre blend has a distinctly nutty flavour, combined with a moistness and slight sweetness.

3009 Nore Soda Bread
Named after the river where our mill is located, our Nore soda bread blend makes a high-quality brown soda bread that is a traditional favourite in Ireland. It can also be used to make fruited soda or seeded soda loaves.

For more information on our soda bread blends and details of our flours suitable for making soda bread, just ask Kells. You can also follow us on LinkedIn. 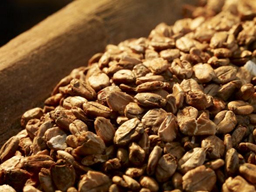 The difference malt can make

The difference malt can make

Kells use malt in many of their bakery blends and applications. It can bring additional flavour, colour and texture to new products which really sets them apart. Kells have been agents for Munton Malts in Ireland for over 20 years and have developed a wide knowledge of malt products during this time.

Muntons manufacture a comprehensive range of malted ingredients developed specifically to meet the needs of food and beverage customers. They offer a wide range of liquid and dried malt extracts; malt flours and flakes and a selection of their products are made with diastatic malt for a softer crumb and a darker crust. All are made at their Stowmarket plant using their own malts made from top quality, locally sourced malted barley. 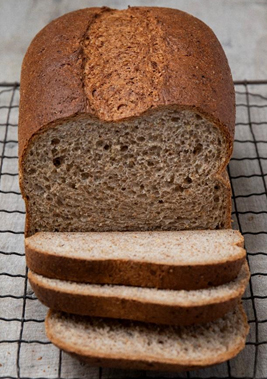 Enjoy bread as part of a healthy, balanced diet

Enjoy bread as part of a healthy, balanced diet

Whether it is a New Year resolution to eat more healthily or a desire to lose a few pounds picked up over the holidays, many people change their usual eating habits at this time of year. Sometimes people cut out bread from their diet, mistakenly thinking eating less bread is a healthy choice. However, bread is low in fat and sugar and experts recommend following a balanced diet, with one third of our food coming from starchy carbohydrate foods like bread, as well as eating lots of fruit and vegetables, drinking plenty of water and doing regular exercise.

Most people don’t eat enough fibre and all bread is a source of this. Advice from the Food Safety Authority of Ireland in their publication ‘Advice for Health Professionals and Health Educators on Healthy Eating and Active Living in Ireland’ and the ‘Healthy Ireland Food Pyramid’ identifies that fibre-rich breads have an important part to play in a healthy, balanced diet. Wholemeal and wholegrain breads, especially, are not only a source of energy, but a good source of fibre.
Kells stock a range of blends that carry a fibre claim: 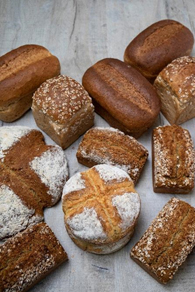 In addition to being sources of fibre, some Kells blends are also high in protein, for maintaining bone health and muscle mass:

All these Kells bread blends are easy to use and make great tasting loaves that can be used to make sandwiches or toast as well as rolls and flatbreads.

Ask Kells for more information on their range of bread blends and to find out more about the additional health benefits they offer. You can also follow us on LinkedIn.

← Previous Next →
« Older Entries
Next Entries »